The Leadwerks team will be hosting our next Google Hangout on Sunday, September 16, at 17:00 GMT (that's 10:00 AM in California). Aggror will talk about his experience leading the Leadwerks Community Project, and we'll provide a sneak peak at the new Leadwerks game engine.   Follow us on our Google+ page before Sunday and check back to join the Hangout. We're limited to ten participants, so first come, first serve. See you then!

Leadwerks Workshop provides a repository of free game items for game developers to use in their projects. Workshop content has been heavily used in several game tournaments to make many different games of different genres.   Today we are rolling out the Leadwerks Workshop Store. This allows us to add new and better quality content for you to use in your games. All assets are curated and verified to work correctly with Leadwerks Game Engine. This includes material setup, sizing, and correct

Today we are releasing three new model packs in the Workshop Store.   The Candles Pack provides beautifully detailed candles and sconces to bring atmosphere to any horror game.     The Modern Furniture Pack includes numerous chairs, sofas, and a bar stool to populate any residential setting with.     The Old Wine Bottles Pack gives you a variety of bottles with two texture variations. Decorate your map with them or use them for target practice.     You can get these items by op

Leadwerks Engine 2.32 is now available.   2.32 -"Render" Lua object function renamed to "Draw". -Added Draw entity callback. -Entity draw callback and Lua "Draw" object function will only be called at most once per frame. Perform animation in this function. -Entity LOD distance parameters changed for better performance. -LoadAnimation now works without exact hierarchy matches, so LOD meshes can all use the full-res animation. -Implemented entity octree with hierarchical culling and pick

Leadwerks gets the Greenlight for Steam

Leadwerks has been successfully Greenlit for Steam, meaning we can integrate great features like the Steam Workshop and Valve file formats right into our game engine! Thank you so much to everyone who voted.   We saw an incredible response from the Steam Linux community, both here and on our Kickstarter campaign for Linux support, which is nearly 85% funded. If the campaign reaches the first stretch goal, we're throwing in Android and OUYA support for everyone who pledged $100 or more to the c

Leadwerks has released a new evaluation kit for version 2.4 of their game development tool. The demo lets developers program games in C, C++, and Lua script for a trial period of 30 days.

Welcome to the Leadwerks.com dedicated server

Leadwerks.com is now hosted on our own dedicated server located in Chicago, Illinois. It was found that this location gave the best overall results for our worldwide user base. We tested the new server in advance for a couple of days, and transferred the database right before switching the DNS, so no data should have been lost. Please submit a bug report if you experience any problems.   The Leadwerks server has a 500 gb secondary hard drive where site backups are automatically saved to, in

You did it! Native game development is coming to Linux

In just three weeks, the Linux community has successfully funded the development of Leadwerks for Linux. This means we're going to bring Leadwerks 3.1 to Linux, with native support for developing Linux games...so Linux games can now be completely free from Windows. Greenlight It's been an amazing few weeks. During this time, we also successfully completed our Greenlight campaign to make Leadwerks available on Steam and take advantage of features like the Steam Workshop. You can see from th 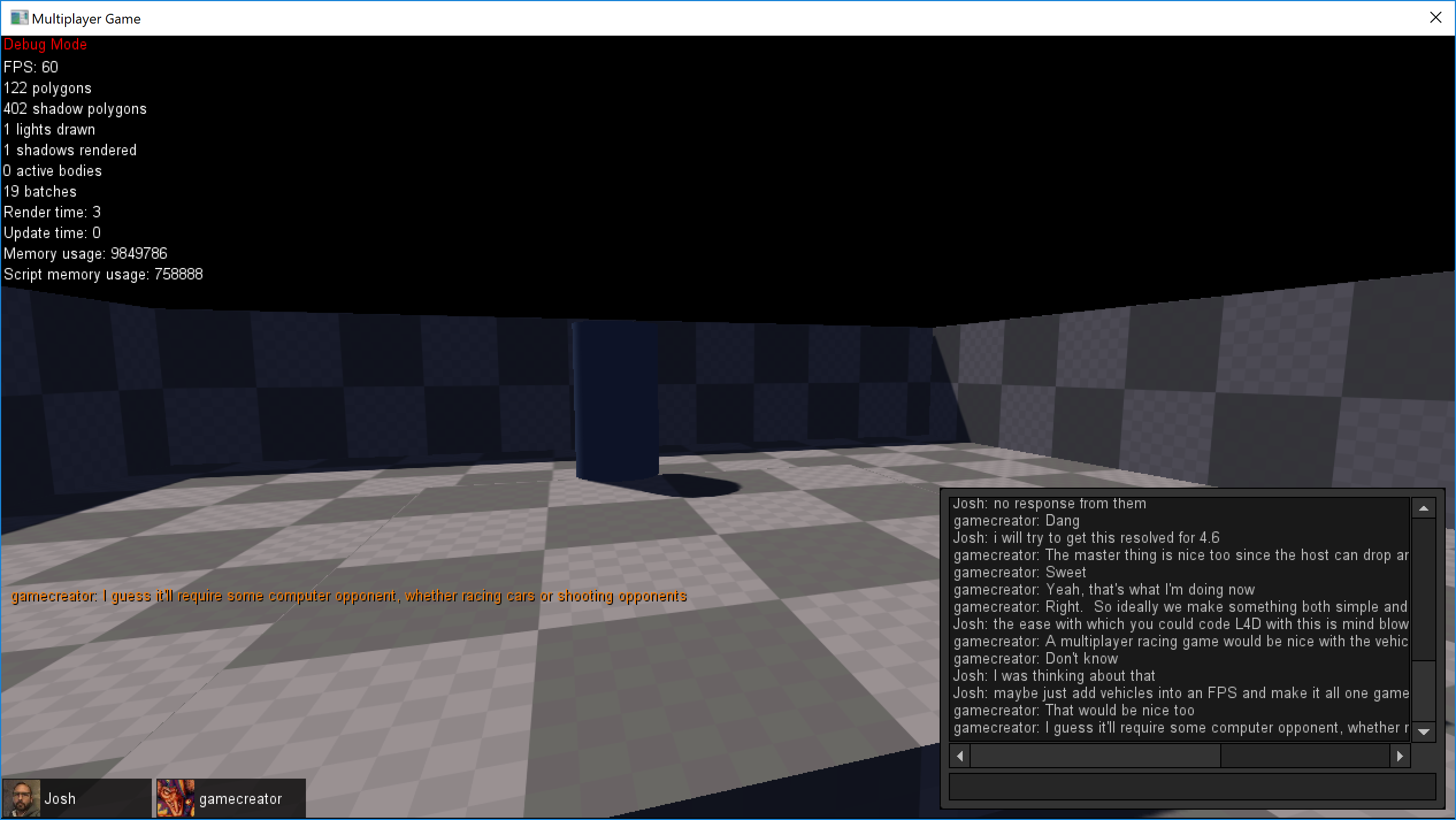 All classes in Leadwerks are derived from a base Object class.  In Leadwerks 5 we separate simple and complex objects with the new SharedObject class. Simple objects like a Vec3 ( a three-dimensional vector), an AABB (axis-aligned bounding box), and other items are all derived from the Object class.  Simple objects are created with constructors.  When we make one object equal to another the value is copied from one variable to another, but the two variables are still separate objects.  Belo

Leadwerks Game Engine 4.2 is now available on Steam. This update adds new features to make game development easier than ever. The free update goes out today to over 10,000 paid users on Steam.   Version 4.2 integrates analytics into Leadwerks games with a free gameanalytics.com account. This allows developers to view statistics on player behavior and identify any trouble spots their game might have as players progress through levels. By viewing a summary of all player behavior, developers

I wanted to post an update on our Steam Greenlight campaign. Basically, we're doing better than most of the top compaigns did during the same time frame. However, because items in Greenlight are never removed, they slowly accumulate votes over time. Some of the software in Greenlight has been there for almost a year, and we've only been in there about three weeks. So their number of votes will be higher than ours for a while, even if we are accumulating votes much faster.   The campaign go

The Rocks and Stones Model Pack by Pure3D is now available here: http://leadwerks.com/werkspace/index.php?/page/products/_/assets/rocks-and-stones-pack-r1   You can also still get the Industrial Cargo Model Pack for the low introductory price of just $9.95 until Monday, September 6, before the price goes up: http://leadwerks.com/werkspace/index.php?/page/products/_/assets/industrial-cargo-model-pack-r8

The standalone enterprise edition has been updated to the now-stable version 4.5. The new installer is available in the client area when you are logged into your Leadwerks account on our website.

Learning how to use C++11 shared pointers

Today we've got four new texture packs available for purchase in the Workshop Store.   The Blood Decals pack provides 30 hand-painted textures for spatters, drips, and puddles of human, animal, or alien blood. This is perfect for adding atmosphere and a sense of foreboding to an otherwise ordinary scene. You can even create trails of blood going down hallways and around corners.     Another creepy addition is the Spiderweb Materials pack. Create a sprite and use these materials to inst

Leadwerks Software is now offering internships through the Center for Entreprenuership at Sacramento State University. Internships are available for programming, 3D art, web development, and marketing.   Programming Internship Assist the development team with tools and core engine design. Work with game development team to create a sample Leadwerks3D game. Gain experience working in a professional software development environment. C++ and Lua experience are a plus but not required.

I've added new rewards including international shipping for our T-Shirt and sticker, as well as an indie team and professional site license. A lot of people have been asking for international shipping for the T-shirt and sticker rewards, but I wanted to make sure I knew what the shipping would cost first. It's a good thing I checked because it costs $16.75 to ship. The good news is its a flat rate for any country, so I can rely on that cost when I price things. To sweeten the deal, I am incl

The Leadwerks 2016 Winter Games Tournament is complete! This tournament brought some new types of games we haven't seen before, with a wide range of new games to try. Here's a review.     The Adventures of Relic Rick http://www.leadwerks.com/werkspace/page/games/_/the-adventures-of-relic-rick-public-alpha-v100-r108   You control the adventurer, Rick, who is on a hunt for an ancient artifact for his museum. During his search in an underground ruin, he feels an earthquake and, before he