After the release of the Vectronic Demo, I started to seek out how to make the game to be able to stand-alone without any additional launchers, batches, or required installations. Shortly after my last blog post, Josh informed me about Inno Setup, and it answered my questions about providing OpenAL if the user did not already have it installed. More about that here. I haven't played with it yet, but it gave me insurance about packaging it up for the final release down the road. Alternatively, Steamworks is also an option, but I'm not touching anything Steamworks related until I get a App ID for the game.

With the Leadwerks Game Launcher, users can edit basic settings such as "Resolution" and "Fullscreen" and any settings that may come in the future. As a stand alone game, it would not have easy to use game launcher, hence a menu with a settings feature is required.

I didn't want to make a launcher, as they are kind of unpopular, and OS exclusive. (You'll have to build a launcher for each platform.) I wanted something already in the application, and can be compiled on multiple platforms minus a few edits here and there. I also wanted most settings to be real time so players can adjust their settings to their likings without needing to restart the game. 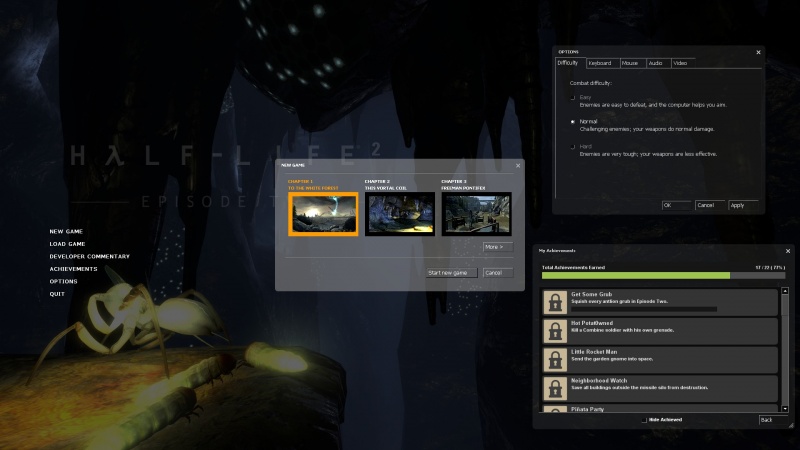 One thing I really liked about developing mods for the older branch of Source was the gameui system it had. It was simple, reusable, and out of the way. You could edit the res files to customize it if you wish, but it's stock files was enough to get you started; even release with. I wanted my UI to be based on this. Only reason why they retired this UI system in favor of their hell of a client based UI system starting with Left 4 Dead, (I played with it, it was not fun) was due to Console/Controller support. Yes, the Xbox360 controller does work in the old UI, but when you open it's panels, you better have a mouse near by!

However, with things like the Steam Controller, and the fact that Leadwerks is mostly PC based anyway, this UI design will certainly do.

Finally, to make it out of the way, the entire system would be written in C++, and not interfere with any game logic written in Lua. However, from Lua scripts, you should be able to communicate with it in case you wish the application to disconnect you from a map, or shutdown the application entirely. From lua, you should also be able to grab boolean states like if the app is paused, connected (in-map playing) or disconnected, and not in any map if needed.

So that was the goal, and 3-4 weeks later, the goal was completed with a few bonuses such as a precache list for loading models/prefabs onto memory, a very basic save system, and in dev mode (which is also enabled in debug mode), information about what version of the engine you're running and map name is printed in the top right corner when paused. (Something Source does which I liked.)

(Could not use media tags due to them being Unlisted)

I'm very happy of the results. Not only this necessary element for a stand alone is done, but this will make my testers happy as they no longer need to edit batch files to configure their settings! I believe that this is necessary, and anyone should be able to have it. After a few more bug fixes, I'll upload the Source files to GitHub along with application releases so even people with the indie version can use it.

Only thing I did not test was the application on Linux since the hard drive in my Linux machine finally died after 7 years of service. Knew it was coming, but still a set back. Hence another reason why I want to make it public, so that it works on all supported platforms and gets more optimized over time. I'm not the best programmer in the world, so every little thing helps!

I'll talk more about this when I put it up. There is a lot of technical stuff about it,