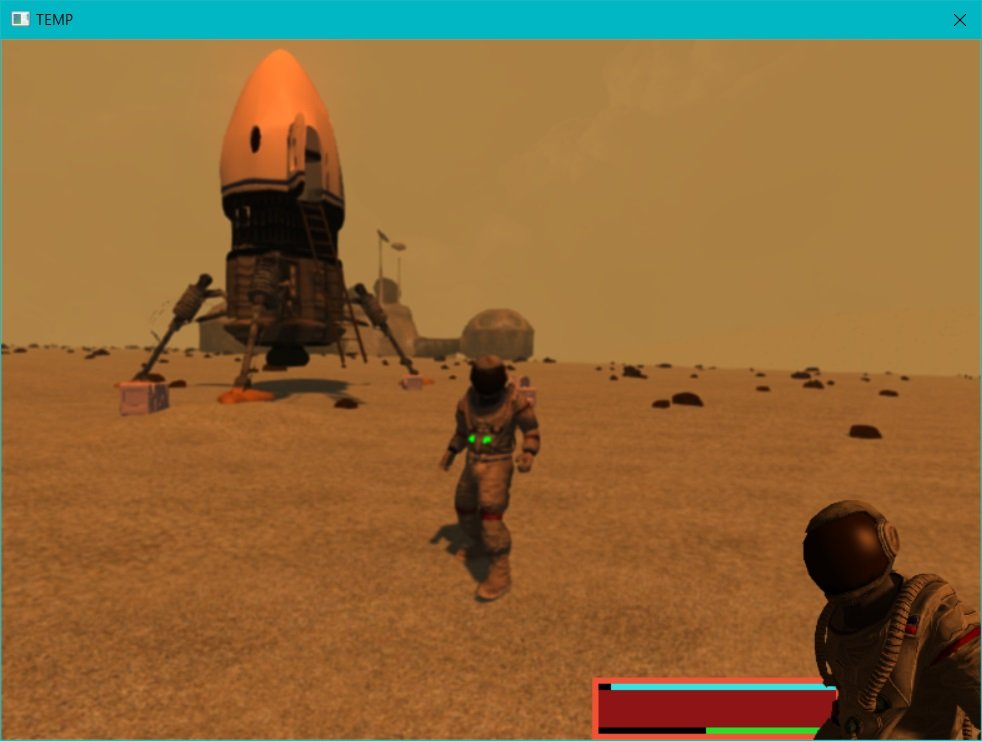 The prototype of a four-wheeled vehicle is completed, where the third person player can get on and off the vehicle by pressing the E key.  To move the vehicle either forward or backward, is done with the keys W, and the key S, to brake with the space key.  And the principle is the same as when driving the character, a third person camera goes behind the car orbiting 360 degrees. I don't think the vehicle is that bad, but I'm absolutely sure it can be improved.  The idea is that this explorer works with batteries, which eventually run out during the night when there is no sunlight.

Mechanics of the game.

I'm going to focus on the mechanics of the game, establish starting point (Landing area), after the orbiter accident on Mars where all your companions died, now, to survive, you will have to repair your suit, oxygen runs out, good luck.  This involves replacing the oxygen condenser that is failing and the suit is stuck.

On the ground and performance.

The rocks, the terrain and the vehicle kill the SPF, but there is a solution, and everything is related to the chassis of the vehicle. That is to say that if I put a simple collision bucket for the vehicle, the yield recovers, something that does not happen if I put a collider of precise calculation for the car. This has the advantage of better performance but is not very accurate, especially when the car crashes with an object in front, because the horn of the car has no collision. And the solution to this, is to put a sliding joint, as was done with the area in which the player climbs the car and descends from it. On the rocks, I am trying to make them with the slightest polygons and the most distant from each other.
Obviously on Mars I can not create canyons, high mountains, is because the terrain does not produce shadows on itself, that's why the terrain tries to be as flat as possible, simulating a desert with dunes.

That's all for now.