Been pretty ill this last week, progress has been sporadic. I took time out to rebuild the engine code so it's now the same for all Apaches, AI and player alike.

Pilot feedback from screen-shots and videos also allowed me to rebuild the whole engine start-up and ENG display page. Automatically switches to in-flight mode. Things blink, change colour, are boxed appropriately. Couple of bits left to do, the biggest headache was dealing with all the fiddly scale changes and adding new code to simulate power transfer which needs some attention. Here's the page with some values thrown in to show some extremes. The whole thing is worthy of a tutorial video sometime. 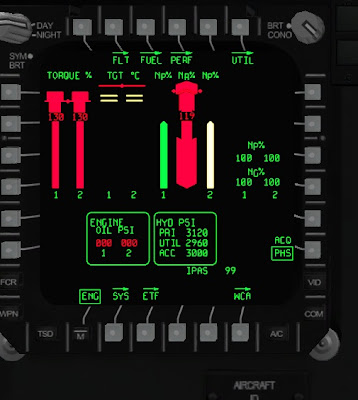 Still have some parts to add to the engine simulation, oil, temp. Rotor speed and torque needs values from the new flight model to work properly but essentially it's just polling values from the helicopters state. Oh another thing I didn't put back in, the actual transient timers, these are counters that show how long you're flying outside of normal parameters which can shorten component life or lead to failure.

The new alert system which I also had to overhaul is ready to drop the betty samples in en-mass.

Will tidy this up tomorrow, look at where we are with the new flight model and see about the Leadwerks 2.40 engine upgrade. The PHY situation is not bad as I thought since we're not using LE for vehicle physics.