Setting up controllers in XPlane is another.

Yes the things you thought were going to take a few days which turned into a week and a bit (you could almost say 'two weeks'). Josh at Leadwerks gave me a leg-up on how to put an MMO style launcher together and I've almost done wrapping up all the security for the necessary database, key code generation, CVS style updates and all the stuff we need to match individual content to clients. We'll make available downloadable content (DLC) such as new maps and the occasional helicopter (the planned CH-47D), not to mention the odd mission pack. 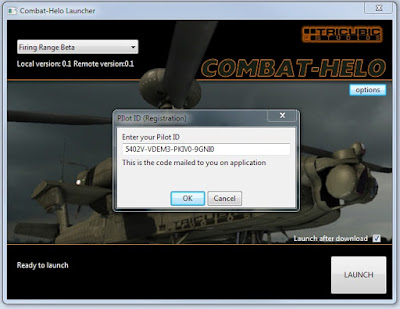 No, this key won't work, it's a fakeSo there was a lot to do to make a simple one shot MMO style launcher. The back-end server stuff had to be built from scratch. The launch .EXE calls home, applies on-demand updates and preps game settings for launch. For simple security sakes I layered server-side scripts for handling the updates, admin and audit. Auditing is handled by triggers, SQL injection is futile since only one procedure is exposed to clients.

Any DBA will tell you Auditing is an important part of any security. If you build any kind of database exposed to the internet and you don't build your own layer on top of any default transaction logging then you're kind of asking for trouble. The database engine used here is not known for keeping detailed logs so it was necessary to build one anyway. Things you might want to think about if you ever need to create systems like these are making log indexes suitable for frequency analysis (this one method Twitter uses to spot spamming), fake open doors and keys and silent alarms. My favourite trick in the past was a fake database that gives the intruder a high and makes them believe they have walked away with the crown jewels while evidence is collected. That sort of none-sense is not required here, I kept this one functional with a tiny footprint.

The Pilot ID we'll be sending out is the key to your content; install once, play as you like. If you share copies around on your network you can launch 'offline' no worries, no need to be connected to the internet until you want to update. It's nice if you want to buy multiple copies for your network and support the effort put into this project but I'm poor too so I know how it is.

Little bit of script consolidation and testing to do before we let this loose in the real world.