Sometimes I run into situations where I don't really know how to structure things. I don't mind this, because it usually results in some really elegant design once I figure out what to do. I just play with ideas and try not to force anything, and when the right idea arises, I will recognize it.

Below is a very rough start to the script editor. The syntax highlighting system was written about a year ago, and works beautifully, using the native text widget on both Windows and Mac. 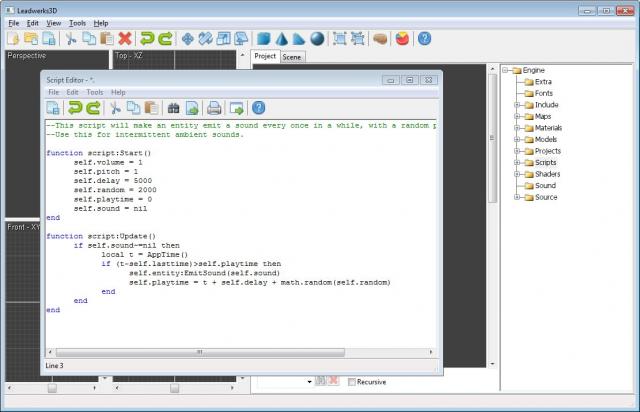 Any Leadwerks3D application can have its Lua state debugged. The engine uses networking commands to communicate with a debugger on a specified port. This means the engine can communicate with a debugger whether it's part of a C++ program, C# app, or standalone Lua interpreter. The debugger can display the Lua callstack and shows all variables and values in the Lua state, including full examination of C++ objects and members!

I do not intend for Leadwerks3D to "play a game" in the editor. We've tried that approach and there are a lot of problems. I want Leadwerks3D to be a very solid and stable level editor, with a visual interface to do everything you need. I also want better consistency between Lua and C++ programs. Therefore, Leadwerks3D will use a run game system more similar to 3D World Studio than the Leadwerks Engine editor. A dialog will allow you to choose the application to run, command-line parameters, and other settings. These will be saved between sessions, so you can hit a key to do a "Quick Launch" and run your game. It would be possible to hook the Lua debugger into any application as it is launched, which could be very helpful.

Let's go back to the script editor now. My inclination is to have F5 launch an interpreter and call the script for the currently selected tab. However, I don't think it's a good idea to use multiple game launch modes, I already described a uniform game launch mode for both Lua and C++ applications, but that seems sort of counter-intuitive if you are working in the script editor and just want to run something really quickly.

There;s also the question of whether we want to provide a standalone script editor and debugger outside of Leadwerks3D. Or should the debugger be a standalone application as well, since someone might want to use it with a C++ application? You see there are a lot of options and a lot of possible ways to set this up.

What about Lua compile errors? I can print that out in the engine log, but how will the editor display it? If a compile error occurs, should the program pause and display the line it occurred at? What if the user just doesn't care, and wants the program to keep going?

Alternatively, the user may want to just hit F5 in the script editor and check for basic syntax errors, which the command LuaL_LoadString() will detect.

That's pretty much all my questions at this point. I don't expect anyone to come along and solve my problems, but the process of describing and discussing the issues will help me come to a resolution.