Just a short post since I'm busy being pulled in a dozen different directions; I got roped into helping someone create a short health and safety film, drafting a project proposal, raising finances and even managed to fix a long standing bug in Combat-Helo. Now the sensors, line of sight and all that guff is now WORKING again, Hooray. A quick background on that, an engine update needed to fix some occlusion issues slightly changed the Model hierarchy in a subtle way that changed how actual filenames of models were retrieved, long story short, they no longer matched the ones in the vehicle database as they had "lod1" suffixed to everything . But hey it was a quick fix once traced, I digress as usual.

Talented Paolo, creator of many a fine mascot has been working on some fictional nose-art and patches for the squad mascot in Combat-Helo. We knew we wanted it to feature a mosquito, the mosquito is the nickname allegedly given to the AH-64D by Taliban forces. Incidentally it was also the aircraft my father was attached to during World War II so I felt it had a double meaning.

The character will be visible on squad patches and eventually be available as nose-art. 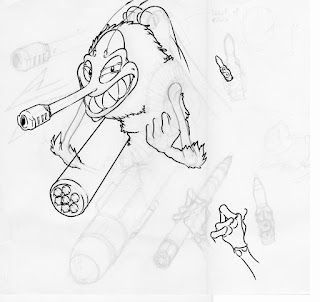 Below is an earlier draft of "Mossie" to help decide on nose style, the nose later became the Apache's signature Bushmaster cannon. 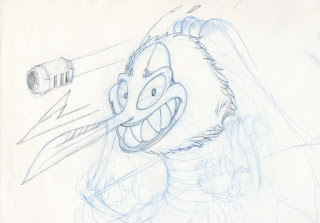 Please post your thoughts and comments on "mossie", suggestions for what he can hold in his left hand are invited.