Following on from "On The Right Path, A* Pathfinding In Leadwerks" I thought before I archive the code, I'd have a little "dabble" with a basic function to get an NPC reading the path data and then following it to the "target" I had a couple of ideas on how to do this but as time for playing in leadwerks was running out I opted for a basic idea.

2. Path from NPC to selection calculated.

3. Path transfered to a temp storage array for that particular NPC

4. An NPC Pilot reads that data.

Think of the "pilot" as the plastic stick thing on the underside of a scaletrix car .. it follows the groove in the track and the car follows right along. This was the quickest and dirtiest method but solved a variety of issues in one. Plus I just wanted to get the NPC moving and the sands of time were running out.

So an hour later and I have not only the NPC following the generated path but the path is updated with a repositioning of the target and the pilot takes the NPC off onto the new track. 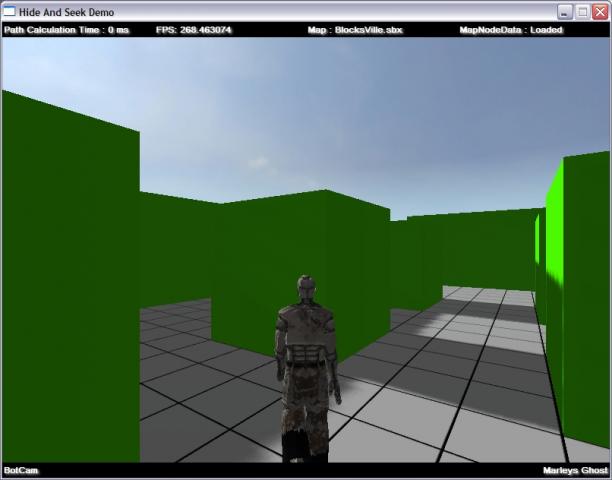 This is all still quick and dirty, when I can remember what the code does and does not need, I will up a small demo.exe to the thread Pathfinding With A*

EDIT: I have uploaded a demo.exe here : Hide And Seek Demo