Another little progress update but first a diversion. Yesterday I took some time-off to brush up on gaming skills and really enjoyed Disney Interactive's "Split Second", one of the few car games I keep going back to since I typically find racing games tedious (lack of skill and patience on my part). However this game is almost pure adrenaline and I find my self coming back to try and shave off 2 seconds while avoiding exploding aircraft and collapsing control towers. Split Second is actually the perfect arcade car game IMO and probably much overlooked in a busy genre. It screams for a post race replay option though.

Enough digression. Not much to show yet as I've only spent an hour or two on it this morning, I hadn't put in the VR cockpit data for the TSD buttons so went and put that data in. Had some color issues down to a mix of LE and OpenGL and sorted out the MPD scale for rendering the currently loaded nav map image.

It is the most complicated system in the helicopter. Which I will strip down to the bone for the first release otherwise I'll be at it for months. The TSD presents a 'Gods eye' view of your helicopter and your environment. Downloaded target information, friendly unit sightings, route navigation and more is presented here. It is a moving map system that can be frozen, panned and scaled.

I need to slim it down into something manageable. Also there are many functions that are desirable to use in the command HQ tent planner and also other helos in future.

Our TSD will feature 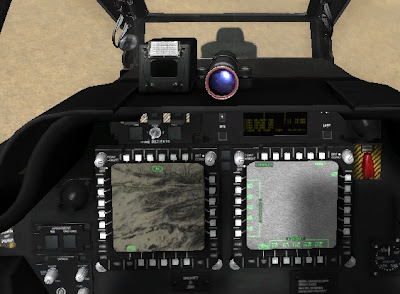 So there's a few things to do but also shared with the ground planning system on the HQ tent computer.

For the base map, it's using the TTerrain() object on the loaded terrain entity (I needed to cast it to get access to the height and normal map data otherwise it's considered a TEntity). A shader converts the normal map into an intensity multiplier ( float intensity = dot( normal , lightdir ) ) for the colourmap, multiply the diffuse and intensity and voila you get a shaded relief map just like the one in the Leadwerks editor (except I don't need the realtime light position and colour that the editor uses).

To this I'll add a colour lookup table from the heightmap and possible some contour lines. I've not used an "lut" function (look up table) in a shader yet so it will be a fun little exercise. Contour lines could be done by setting output colour if the heightmap value is a multiple of 10 (meters) or whatever value I pass to the shader. This just colours the pixel if the value is in that multiple, steep terrain might bypass that value so results will be a bit patchy depending on the source data. I'll look into a proper contour function.

Keep in mind the heightmap in terrain doesn't have a flipped y axis.