While waiting on fixes for the flight-model and control inputs, putting some game into the game we talked about ranges and how performance measuring was going to work. In addition we wanted to add a little variety which required working mob AI.

So nothing fancy but I managed to rustle up a simple finite state machine FSM to get some tanks and cars running around. Our design uses a group formation system (a group is a number of individual units that share common logic, e.g a tank platoon) and if you've ever used Missioneer you'll be familiar with the concept.

Currently tanks are driving around a small test tool I'm using to test the module, switching formations, revving engines, exhaust smoke. Performance is king so updates are interlaced, no vehicle physics are required so animation suffices. 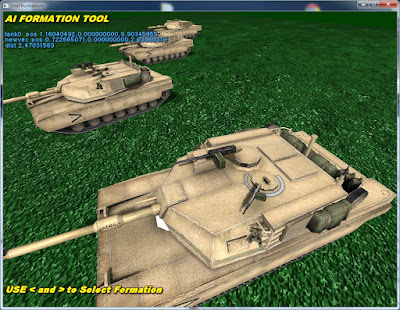 Each group member has a goal pivot, when the formation changes the individual vehicles seek their pilot according to their driving behaviour. All the pivots are parented to a master pivot controlled by the group. This way you just need to update the group position (e.g movement orders to x/y) and the rest takes care of itself.

We can look into expanding the states later when we want them to do more complicated things, and do that on a per unit basis. Tank gunners will want to turret to target when attacking, manpads will simply turn to face. Same state but slightly different logic per unit. And this can be done in LUA level by setting the models "fsm_mode" key. That makes less work for me and gives Dave the artist some nice toys to play with. At the end of the day I at least have a tile based tank engine to play with. I'll throw up a video.

For the gunnery range we don't need anything demanding; some AI road following traffic, people in groups and the odd vehicle following a set of waypoints. Nothing spectacular or difficult there. That hardest part is turning the 3D geometry of the road network into a navigation grid. Then your mob groups need to know if they are supposed to be following the road or their own formation (switching as they move from one to the other).

The one problem I have in getting AI traffic running around is putting together a nav-grid I can work with. Our roads are large models (2 or 3 assorted) that are built in 3D Max using a height deformation modifier (the same height-map used to build terrain layers). And it mostly fits. I think we need to flatten it out so only the surface triangles can be read and turned into usable data.

Speaking of art, "Mossie" has been given some love. 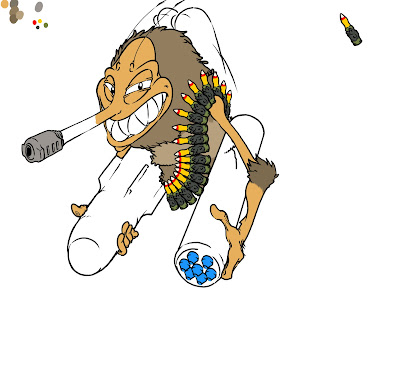 FSM gate scandal - Why they are old hat