I am currently working with EKI One, working through its format and structure, getting to grips with the lua behavioural scripting side and trying to brush up on my c++ skills, actually brushing up on my c++ skills is an overstatement as I don't actually have any to brush up! .. lol, I have also been going through my Blitzmax code and trying to compile all the game mechanic functions and methods into a single .mod, trying to keep things tidy. Whilst going through my **** drive, I mean, my well organised storage drive, I found some DarkBasic/DarkGDK stuff, which included the Dark AI library. I have never really used DarkGDK, although I did start out a few years back with DarkBasic. So I wondered (as you do), could it be utilised in LE2.5? Having never used Dark AI (which came in a bundle, that I have never used either, but it was a bargain lol) I knew that R.T.F.M. would be in order. If it relied solely on DBobjects and inherent DarkBasic functionality then probably not. I spent half an hour looking through the commands, and an hour later had it working in an LE context. So to answer the question, it seems you can. 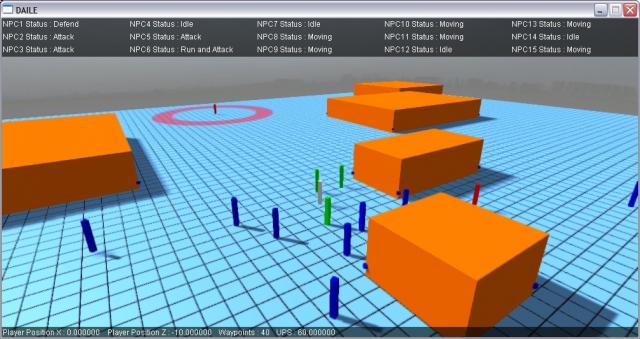 I'd have upped a better quality image but I am told "You can upload up to 7.74K of files "

Its all a work in progress, and probably will remain that way as its certainly nowhere near the solution that EKI One is, but as an exercise it wasn't a bad use of a few hours.