Remember when Virtual Reality was going to be the next big thing? Seems odd having to re-create something virtual in a game that is virtual, the modern Apache has evolved a bit since the late 1990s. Being able to display in the pilots 3D monocle (yes that's a joke) a lot of data to the crew about targets hidden behind objects, terrain contours. These 'virtual' items are matched 1:1 with the crews head movement unlike a lot of the symbology that is static.

The first one we're going to look at is the "head-tracker". This is a broken diamond that represent the nose of your aircraft. As you look left you should see the diamond maintain a relative position to the nose of the helicopter. For give my "Novalogic" terrain map. 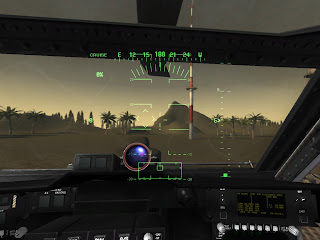 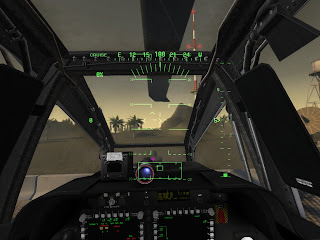 I had a bugger of a time getting the function to match up to the outside world until I worked out I was missing the aspect ratio of the window (the HUD has a scale factor too in case it's too big or small for your resolution). We're ready to add the waypoint indicators and LOAL/LOBL missile constraint boxes. The flight path indicator is another one, that represents the position of the aircraft in (I think) one second? Have to check my notes on that.

You might see some alerts on the UFD that shouldn't be there, as always it's not final and I know about them.

The cockpit seems slightly offset from the absolute outside world position, now the crew does seem to sit off axis but I'm checking this out. The camera positions are absolute and bang on the X axis zero line of the aircraft and not directly centred on the crew seats. It looks a bit odd otherwise. Looking into that anyway.