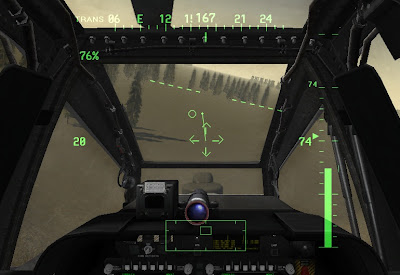 We added a couple of items that make it possible to do some precise flying.

The Velocity Vector is the blob on the stick that originates from the cross in the centre of the HMD. This is a representation of the direction and speed of your aircraft. Think of these as "top down" views with your aircraft in the middle, forwards movement is up, sideslip left and right. It's scaled so that the top of the HMD (below the heading tape) represents 60 knots. This scale changes depending on the mode but for now I'll stick to the TRANS (transition) which is the most used.

Using these cues it's possible to perform some precision flying and arrest unintended movement before it becomes a problem. Learning how to read these will improve slow speed manoeuvres approaches and landings.

I also changed the rate of climb indicator to a solid pointer, slip ball is currently being added. And basic waypoints and steering cues will probably be done this weekend. Especially if the weather is still lousy.