Path finding is a technique used in many games that allows an object to find its way around obstructions to get from one point to another. There are a lot of miss understandings regarding this technique and many treat it as a mystery that is best left for the more experienced programmers. However, the big scary word 'AI' is not nearly as scary or complex as some may think. My entire path finding system only contains 4 classes, 1 struct and about 450 lines of source excluding comments. I'm sure you'd agree that this isn't really that much.

On that note I'd like to point out that path finding isn't even AI itself despite popular belief and the fact that it is written about in many AI books. Path finding is simply a tool that AI utilizes to determine several points that an object must go through to physically get from 'A' to 'B' in the shortest or most favorable route possible. The AI comes in firstly when the object decides where it has to go for starters dependent on its behavior and secondly when it decides what to do with the path given to it by the path finding system. Another reason I disagree that it is AI is because the path finding doesn't belong to an object at all. It is an single external system that the objects AI consults for information.

Well now that that is out of the way I'll get on with it. Today I completed a full path finding system for my game. The path finding network is nodal and it utilizes the A* path finding algorithm. The most important feature of the system is the following funtion:

This function simple returns a list of Nodes that the object must traverse in order to get from the startPos to the endPos. How the object uses that information is up to that objects AI behaviors.

Here is a quick video of it working in the game:

In my mind are three important sides to path finding including:

The node network or path finding graph is simply a bunch of nodes (i.e. 3D points in space) with Links between each other representing paths that are possible to be taken without hitting obstructions. The below screenshot shows a visual representation of the nodal network. 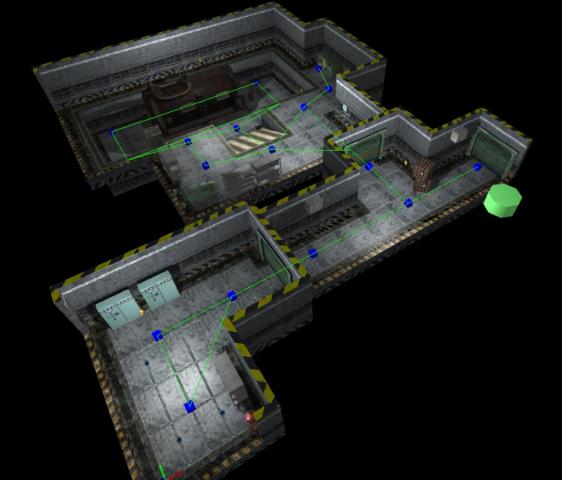 Each node contains a list of links that are Outgoing from themselves. That way when the algorithm assesses a node it can quickly and easily access its outgoing links.

Each link contains a pointer to its start Node and its end Node as well as a cost. The cost is important for the sake of the A* algorithm as it needs to know how difficult each link is so that it can pick the optimal route. Most costs are usually calculated by distance between nodes. However, they can be increased or decreased for different reasons. For example, you may consider a higher costs than normal for travelling uphill and a lower cost for travelling downhill. The choice is up to you.

I have utilized my level editor to facilitate the creation of this path network in a quick and efficient way. This way the path finding network can utilize DDD (Data Driven Design).

The classes I made for nodes and links are as follows:

Excuse all the overloading functions. I wasn't sure which method I would want to use to AddLinks so I made a bunch of them. Now you may not understand it all as some of the stuff is specific to my game. However, you should be able to get the general gist.

The heuristic estimation is the estimation of how far it is from any given node in the network being assessed to the destination node. The closer this estimate is to the actual distance the better. However, it does not need to be perfect. Now don't take me the wrong way this is an estimate of the distance that the object needs to travel to get from A to B not the birds eye distance.

The A* algorithm will behave differently depending on if the heuristic is under or over estimated:

There are a number of ways that the heuristic can be estimated including Euclidean distance, look up tables or by solving a "High Level Bucket Nodes" path.

Each method has its pro's and con's. I guess it is just very dependent on how your level is set out and how much performance you are willing to play with. As the Euclidean heuristic will always give a good path I decided to use it just to get the path finding going. However, I may change to another to improve performance when it gets to optimization.

The A* algorithm is a very well known and common algorithm used for many games path finding. As it is so common I'm not going to talk about it very much. It can be found in many places on the internet but beware, you will get the best information from an AI book as internet sites tend to leave out bits and pieces of information.

This blog has gone long enough and I don't think I could do the A* justice without making this 3 times longer. I may write a tutorial on it using C++ someday but that's a big maybe.. I have a game to make XD.

I shall bore you no further. Check out the path finding network being created in the editor. Enjoy