I'm back home now, relaxing after a long week away. And what a week it was!

I got my lecture out of the way on Monday. I felt like I was pretty well prepared, but some acoustical problems in the hall really made it very difficult to concentrate, plus I was pretty nervous about talking in front of about 600 people. I did it though, and hope to do another one next year. The recorded lecture should be available in the GDC vault.

During my talk, I described my experience as a PC developer, moving into mobile, and making a renderer to be cross-platform and scalable. I also showed off a deferred renderer running on the iPad. A couple of interesting things came out of this research. FIrst, I figured out a few details on how to render to a texture. This forms the basis of project shadows and post-effects on mobile. More importantly, I discovered that mobile hardware is better than PC hardware at rendering to textures! This is what the performance of a deferred and forward renderer looks like on the PC: 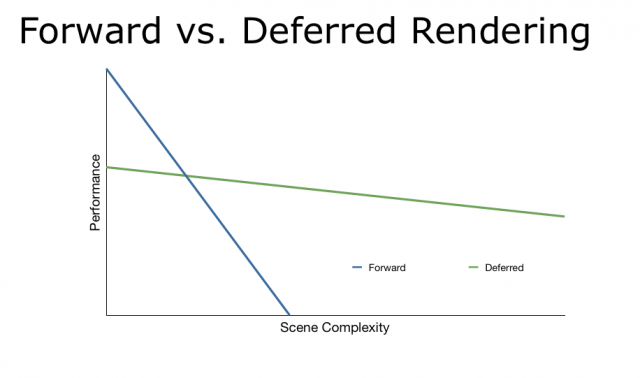 A deferred renderer scales better, but takes an initial hit on performance, which is why Leadwerks 2 has such heavy hardware requirements, and the framerate never goes above 300 or so. It turns out, PowerVR graphics hardware for mobile can render to a texture at no cost. We get the scalability of a deferred renderer, without that initial hit on performance: 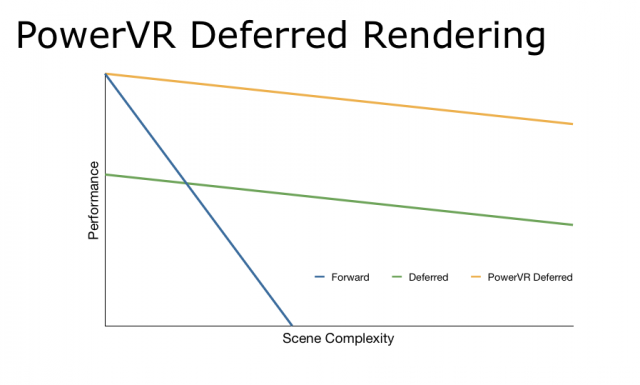 I talked to some engineers with Mali, and they told me their graphics chips work the same way. The implications of this are pretty staggering. It means that per unit processing horsepower, mobile graphics hardware is actually more capable than PC graphics hardware, and AAA graphics on mobile are right around the corner.

We set up our booth on Tuesday before the show. This was my first time going behind the scenes, so it was a totally different view of the conference. Before the expo floor opened, I asked the Oculus Rift guys if I could try their new toy out, and they let me demo it. I was only disappointed that they used a Mech-style game and the cockpit took up most of my peripheral vision, which eliminated any reason to look around and experience the full VR effect.

I had a lot of meetings with different graphics hardware manufacturers, got some good technical info, and scored some free hardware for development and testing.

The response we got from the attendees was really good. When we explained what Leadwerks 3 was, everyone got it right away, and were enthusiastic about what they saw. Here's some footage from the show:

It was a push to get Leadwerks 3 out in time for the GDC, but well worth it. We got the word out about Leadwerks 3, got a lot of positive feedback and a better idea of what our target market needs, and put Leadwerks on the radar of some very big companies in the industry.

Starting Monday, bug fixes have top priority, and I will start adding some graphical enhancements that will make a big enhancement to the renderer.