As I started my last blog off with a lessons learned I thought I would continue the trend in all of my blogs and share a bit of what I have recently learned.

More often than not, as game devs we have our weaknesses in certain areas of game dev that just makes things that much more difficult. Some of us are great programmers but bad at art, some of us are good artists that are bad at programming and of course.... there are some of us that aren't that flash at either. We will always have our deficiencies. However, the question is.... when there is a deficiency in your skill, what do you do about it?

It is so easy for us to just say, "I'll get someone else to do that", or just ignore the problem out-right..... we can go on complaining about how the world is so cruel to us that xyz is so hard and you can't find anyone to fill the gaps... Unfortunatly as predominantly indie devs we don't have the luxury of resources. We have to try fill in the gaps as best we can.

Instead of wishing we were good at something, how about we try and get good at it. No one starts out skilled at a lot of game dev stuff, you have to work on it and continually get better, read books, search in google, try fail try fail and try again until you get better. Also don't rely on a college to make you better at game dev as you have to work on your own to ultimately get good at it.

Don't get me wrong.... there is nothing wrong with not being skilled in something, what is wrong is when you decide not to do anything about it. As for myself I, my major weaknesses are 2D art, texturing, concept art etc. I was really having a hard time wondering how I was going to deal with it. However, I feel now my new approach to all of these things will be, just keep doing it until I get better... no excuses. No one is going to pick up the pieces for me, i'm an indie and at the end of the day I can only rely on myself.

Recently I have been focusing on character design for my game. I have put a lot of thought into it, how I want them to look, how they should act and behave. I thought up all these cool looking robots but at the end of the day I had to have a hard long think.

Is the player going to be able to relate to these characters, probably not. I find a lot of the time when I am playing games I have to be able to relate to the main character on some level otherwise I just will struggle to get into it. Even a robot can have a relatable personality and that is what I decided to go for in the end, erring on the side of "not so serious" and still getting the fun factory in.

The image below is of the first design for a robot I made. I thought it was rather interesting at first how it runs on tracks and such. However, it wasn't until I modeled it that I realized that it just wasn't relatable and I just didn't like it.

I then went about rethinking this character. Making him more flexible, more friendly and really just to have more personality. Here is the result of rethinking the same character from a different perspective. 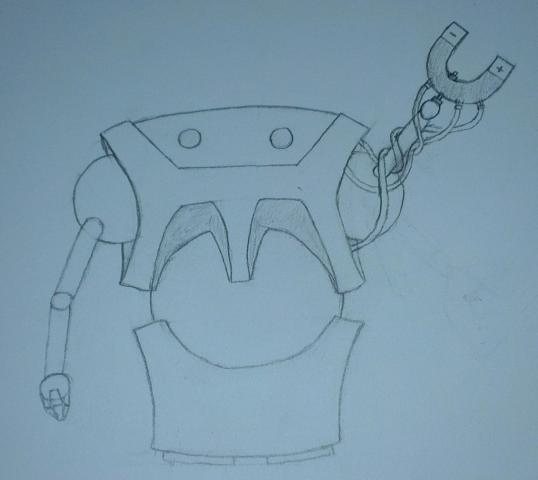 You'll probably notice that this is the same little robot that I showed for animations in my last blog. I hope you agree that this second attempt is much better... In fact what was I thinking when I drew the first one.

So finally here is just one more drawing I did tonight where I tried to design another robot and try give him personality. Now I'm not the best drawer but I gave it my best and feel I achieved enough to make it look good and personable in 3D.

This here is MAV, he has a cool laid back personality. I gave him glasses, or what looks like shades, and put a little alarm light that looks a bit like a top hat. He even looks a little 'fat' and is the guy that just sits back with his guns. I'm not 100% sure about it yet but I hope I still like the design tomorrow. 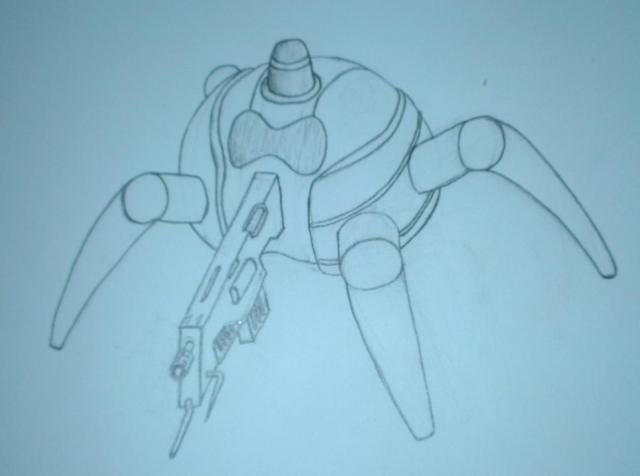 I want to make sure that all my main game characters are designed well and have personality that players can relate to. I am not afraid to completely redesign when I feel it just isn't good enough as the main characters are just about the most important designs in the entire game as far as artwork goes.

Anyway hope you enjoyed my blog.... Excuse my lack of drawing skill.. this is just me working on my weakness and keeping on drawing until I get better.